From its humble beginnings, St. Anthony of Padua Parish has grown and prospered. In 1931, the Rev. Salvatore Marino was appointed Pastor to oversee the building of an Italian parish in Akron, Ohio. Father Marino had been educated at The Catholic University at Palermo and in Rome, Italy. He had always had a dream of building a church. Art galleries and beautiful cathedrals of Europe had inspired the young man as he studied for the priesthood. These inspirations of Father Marino, combined with the talent of the builder, Mr. Sam De Maio, created the beautiful St. Anthony of Padua Church of Akron.

In the beginning, a basement chapel was built to hold services until the church was completed. The construction of the church took seven years of toil and love during the depression years. Many men of the North Hill area were out of work and they devoted their time and labor in building the exterior of the church. Every day the men were served a big hot meal cooked by their wives. The food was donated by the families of the church. The women gathered the food by walking all over North Hill with their children’s red wagons.

The material to build the church was obtained by Father Marino from many and often distant sources. The beautiful interior of the church, with the exception of the roof and the ceilings of the sacristies and the vestibule, is entirely of marble. The marble and colored glass form many different and beautiful mosaics. Fifteen to twenty different kinds of marble were used in the designs. The different kinds of marble include Cremona, Spanish, Portuguese, French, African, Rosa, Verona, Sienna, Pavenaccio and Botticino.

The church was dedicated and the altar consecrated on November 17, 1940 by Bishop James A. McFadden. In October 1943, a fund-raising drive commenced to pay off the church mortgage. The drive concluded on April 20, 1944.

Father Marino died November 11, 1943 at the age of 59, following a short illness. Archbishop Edward F. Hoban appointed Rev. Angelo J. Trivisonno as the new Pastor. St. Anthony of Padua Parish grew and prospered under the direction of Father Angelo. A school was built in 1954 and a convent was built to house the Religious Teachers Filippini in 1958.

The title of Monsignor was conferred upon Father Angelo Trivisonno on March 10, 1960. Monsignor Trivisonno was Pastor for 30 years until his retirement on May 28, 1974.

We are very proud of our parish and school.  We hope to continue to serve the needs of our North Hill community and provide our students with the best education possible for generations to come. 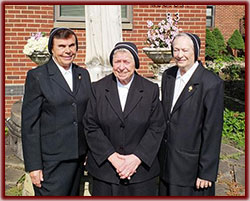 St. Anthony of Padua School has been staffed by the Religious Teachers Filippini for more than 60 years.